Some people say that the future trend of blockchain will still be in the DeFi area of decentralized exchange and stable currency.

USDT has been the top stability currency for many years, and doubts about its extreme centralization have not diminished as USDT usage has increased.Arbitrary issuance, financial opacity, lack of an open and transparent operating mechanism, and market manipulation have become fatal factors limiting its development. The stabilization currency is one of the troika of DeFi ecology.The rise of DeFi this year has raised the prospect of decentralised stabilisers, led by DAI, which are emerging in the cryptocurrency market.

On December 2, 2020, CoinEx and QIAN reached an agreement to launch the KUN/USDT market, and to celebrate the simultaneous launch of KUN online, CoinEx initiated a welfare campaign to share refunds with 40000KUN.

KUN is a QUSD governance token based on QIAN's stability currency agreement, which is used to vote for QIAN's ecological governance and maintain QUSD price stability.

On December 9th,David, founder and architect of the QIAN Stability Coin agreement, was invited to share with the community what QIAN has to say about CoinEx's new AMA column "Please Speak C"

The following is the transcript of AMA:

1. Let’s start with an easy question. As we are all curious, this project has an interesting name, QIAN. So why did you give it such a name? Is there some meaning behind it?

Yes，there is a special meaning of QIAN, as we said in the WhitePaper：QIAN represents the universe and money. In the "Eastern Holy Bible: I Ching", the "Hexagram Qian" represents the sky, the law of everything in the universe, which has the most positive energy and spirit.

Based on this spirit, we named the first fully community-driven decentralized stablecoin protocol to be QIAN. And we hope that the great traditional culture of China can be understood around the world, and more cryptocurrency holders could be fans of traditional Chinese culture.

2. As the governance token of QUSD, what role does KUN play in the entire QIAN stablecoin protocol? How can community participants obtain KUN? How about its value capture ability? 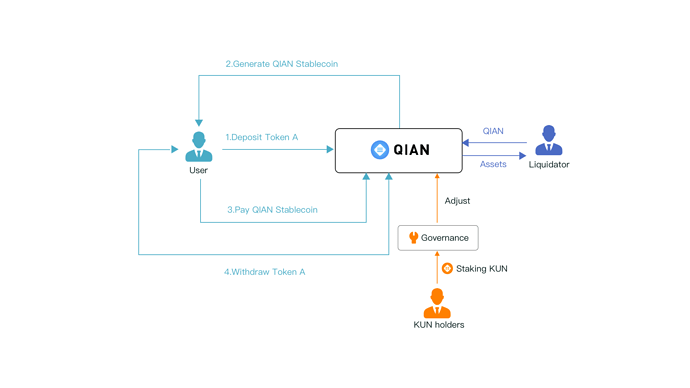 Community users can get $QUSD by minting, participating in liquidity mining, join $KUN governance mining, etc., or can directly buy it with $USDT at CoinEx.

$QUSD will introduce a stablecoin Flash Loan service and will use the Flash Loan income to buy $KUN in the market and keep it as a reserve. $KUN will also be burned through NFT tokens interaction and other ways to reduce the number of circulation.

The DeFi project $AAVE just announced that their Flash Loan business exceeded $1 billion, and their charge fee is 9/10,000 each lending, which is a considerable income. Therefore, in the long view, $KUN can have a strong backup through flash loan business.

3. Before it was launched on CoinEx, KUN already had trading pairs available in decentralized protocols such as Balancer and UniSwap. What made you choose the centralized exchange CoinEx as a partner this time? After KUN is listed on CoinEx, what are the benefits for community users?

The QIAN stablecoin protocol is a decentralized, community-driven DeFi project. About listing issues, we will always choose the exchange that has the same community culture with QIAN, we focus on transparency, and the exchange partner should meet the long-term development needs of the QIAN community.

After communication, we are very happy to find that CoinEx meets the QIAN community standards in terms of global influence, product quality, operational transparency and compliance, and both of us are also highly compatible in the concept of community development. Therefore, QIAN governance token $KUN chose to get listed on CoinEx, and carried out events such as deposit, trading competitions, and airdrops.

4. As we know, the generation of QUSD is a process of implementing the "currency swap agreement (CSA)" between users and smart contracts, so stablecoin minters need to lock in mainstream digital assets such as ETH and BTC to QIAN smart contracts before they can get the anchored QUSD stablecoin. Under unilateral market conditions, CSA holders may face collateral liquidation issues like in the case of MakerDAO. So what are the privileges for CSA holders? How can CSA holders create benefits for themselves?

As a CSA holder, you can generate $QUSD stablecoins within the quota range. In order to encourage everyone to mint $QUSD, the QIAN project has launched a six-month minting and mining reward events starting on October 23, 2020. Minters who only need to mint $QUSD can get $KUN according to the types of minted assets and the amount of $QUSD generated.

As a CSA holder, you can also arbitrage through liquidity mining and $QUSD transaction except minting. At present, you can start liquidity mining of $QUSD through the two entrances https://qian.finance/mining-eth and https://bsc.qian.finance/mining-bsc, corresponding to the Ethereum and BSC networks respectively. We encourage everyone who uses $QUSD to actively get involved in liquid mining to enrich the ecology of $QUSD and get mining rewards at the same time.

5. The charm of DeFi lies in its decentralized characteristics that can improve transaction efficiency while ensuring that each step is open and transparent. Although the private key is in the hands of individuals, asset security can also be guaranteed. This June, however, constant hacker thefts amid the DeFi boom have once again warned investors of the security risks facing DeFi smart contracts. What will you do to ensure the safety of users' assets locked in QIAN smart contracts? 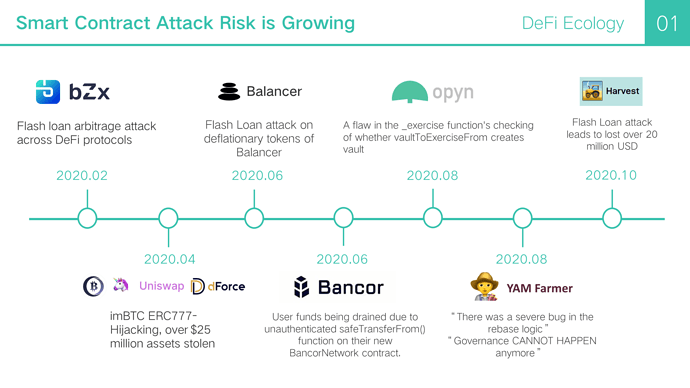 This picture shows the major DeFi security accidents of this year. Unlike ordinary DeFi applications, the base layer of the QIAN stablecoin protocol uses two core technical architectures: APEC, an extended component BEAMS. The ultimate goal is to make the QIAN protocol be close to the development iteration speed and user experience of traditional Internet products, while retaining their security features.

If there is a problem with the contract, GEL can manually or automatically trigger the emergency lockdown, stop all inbound and outbound calls, and protect the security of the assets locked in the contract.

QIAN adopts bank-level risk control standards, uses an independent high-availability master-slave hot standby cluster, and operates 7x24 hours a day. CALM checks the status of the contract every 5 seconds and performs strict accounting and reconciliation of all financial assets in the contract.

Through the above active/passive defense measures, the QIAN protocol can protect the security of users' locked assets to the maximum extent.

QIAN has carried out a lot of preliminary work on the consensus build-up of the community, including each round of liquidity mining settings, collateral assets settings, etc. Each major decision is finally made through goverance voting after full discussion in the community.

7. Let's talk about another issue that concerns the community. What is QIAN's future development plan?

As a stablecoin asset, QIAN will increase the usage scenarios of $QUSD in the next step, and at the same time, through the combination of Flash Loan and high-quality ecology collaboration such as $YFII. At present, $KUN mining strategy is also going to join the $YFII Vault.

In addition to DeFi, QIAN will further explore the cooperation with the needs of the $BTC, $ETH miners to expand the usage scenarios of $QUSD; it is also planning to use $QUSD in the transaction of NFT tokens. In short, there are a lot of things that QIAN needs to do in the future. QIAN needs more outstanding talents to join the QIAN community to build community consensus together.

8. Last but not the least is a popular topic recently. In your opinion, how will Ethereum 2.0 influence the development of DeFi?

According to the technical architecture of Ethereum 2.0, in the 2.0 era, the Ethereum network will create a group of shards. Sharding is a method used by Ethereum 2.0 to expand the network performance to meet growing user demand. Its work is similar to cutting blockchain into small segments.

In Ethereum 2.0, judging from the aspects of composability, efficiency, total assets, etc, all DeFi applications will eventually be on a single shard, and they will gather together to form a huge, crowded "DeFi City", it is certain that the transaction volume, the number of DApps, and the number of users of the DeFi shard will far exceed other Ethereum shards.

Therefore, in the era of Ethereum 2.0, DeFi DApps will not have to worry about other Ethereum operations occupying their own computing resources. It can be predicted that the gas consumption of DeFi DApps will be lower than it is now, and the speed will be improved. By then, DeFi will be in a real natural trend of the digital world, I'm looking forward to the arrival of Ethereum 2.0.